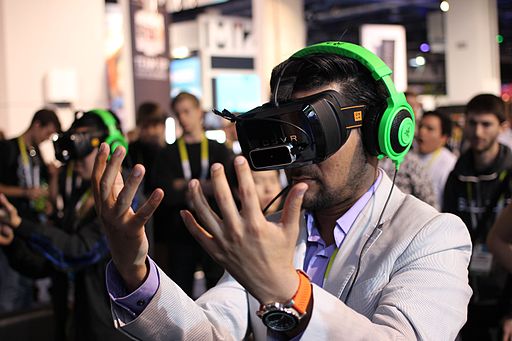 When I received the opportunity to attend the eLearning Guild's virtual reality (VR) conference, Realities360, in San Jose on July 26 - 28, 2017, I jumped at it; especially since I am highly skeptical of any near or medium term chance that VR will have a meaningful impact on my personal or professional life. Take that statement from someone who lives in Silicon Valley and works to help organizations adopt emerging technologies.

My skepticism is rooted mainly in my lack of knowledge of the subject, which is why I wanted to attend this conference in the first place.

I only know two things about virtual reality. First, when I learned about virtual circuits in a telecommunications and networking product training course, the instructor made a joke that everything after the word "virtual" is a lie. Second, we have an Oculus Rift at ServiceRocket in Palo Alto, and I have used it a couple of times; once to experience being at a park and a second time to make a Messenger call using Facebook Spaces.

That was very cool.

But after a few minutes, the thought of booting up the computer, putting on the headset/goggles, grabbing the hand controllers, and messing with all the wires and sensors, just to get started, was just too much of a barrier for me. I don't play video games and once you've seen one virtual reality space, you've seem them all, right?

The WOW moment wore off pretty quickly for me.

And that is why I wanted to attend, Realities360. I wanted to see (and hear) what people are doing in VR now and where it is heading, especially as it applies to learning.

Since I have used an Oculus Rift, I was keen to see the opening keynote, How VR is changing the Future of Content by Maxwell Planck, who is the Technical Founder of Oculus Story Studio. Great, I thought, maybe I'll learning something.

Maxwell hooked me early on in his talk when he said that VR is a magical experience and then the novelty wears off. OK, the VR guys is acknowledging this, maybe VR won't just magically appear on everyone's face.

"After the novelty of VR wears off, I want to put you in a story," says Planck.

He then went on to tell stories about the short Oculus movies he helped make and how they improved over time. Movies like Lost, Henry, Dear Angelica, Talking with Ghosts, and coming in 2018, Wolves of the Walls.

It was fun to see the clips, but I kept thinking, "C'mon, no eLearning designer is going to do anything to build content for learning that even approaches what Planck is showing.

It's wearing off again.

Then Planck told us how long it took to create these short VR videos. One year for a six minute short. I can only assume that took a team of several people, one year to produce.

It's worn almost all the way off.

I imagine reading that business case for creating a virtual reality course on a new software product, "We are asking for $8 million to create a 6 minute tutorial on how to configure user permissions in our upcoming product. The tutorial will be completed in 18 months."

VR needs to be about bringing people together to solve problems

As if reading my mind, Planck says, "VR needs a new business model because the cost of creating content is still too high." He goes on to say that if VR is ever going to be used as an education tool, the tools for making the development of education need to be much better. Until that happens, VR needs to be a social experience.

"VR needs to be about going out with your friends."

And then it hit me. The instructional designer in me got it immediately.

Planck goes on to describe how VR needs to:

In the language of us learning professionals, VR needs to be about:

VR in education: Think bringing distributed people together in a flipped classroom model

We instructional designers strive to design learning experiences that help people learn new skills (achieve learning objectives) through doing, practicing, and trying/failing in a safe place. To do this, we should start thinking about using VR to bring people together, in an experience that is more immersive than a conference call, and give them a challenge to solve, together.

Think flipped classroom. The activity occurs in VR with a group.

For software education, imagine bringing people together in a present and immersive environment, providing them with a problem to solve with software, and challenging them to solve it together. What if tools like Skytap, Cloudshare, and Readytech gave us the tools to create virtual reality labs that were more immersive and more based on teamwork.

Isn't that how we solve problems in "real" reality?